Intercity transportation of Ontario and Canada

Brampton Transit - urban transport system of Brampton. Prices, schedules and travel conditions can be found on the official website: brampton.ca

Go Transit is a long-distance carrier to the next GTA cities. This transit system includes buses , diesel comfortable trains and two-story electric trains. This carrier is one of the most expensive. Support rather ramified transport links and goes quite often. Trains run very slowly, but on schedule.

Any additional information, including timetables and fares can be found at the official website of Go Transit gotransit.com

Note: Often, when move from one transport system to another, you can use pre-taken transit voucher. Sometimes it gives a further free travel, sometimes a discount fare. Payment systems in each of its own, almost always incompatible with each other. There may be some exceptions to this rule. Just introduce a unified system of payment Presto. Details: prestocard.ca 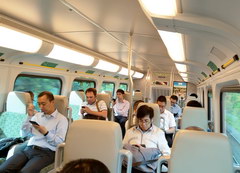 Greyhound - one of the oldest and best-known bus company in North America. Often provides decent prices when buying in advance. greyhound.ca

Megabus - budget division of Couch Canada. The advertisement is always indicated that there long distance tickets for 0,78 USD = 1. CAD In fact, those are hard to find, but you can find good deals when buying in advance. Services Includes toilet, air conditioning, internet. Pay attention to the days of the week, weekday tickets are usually cheaper.

Important: Please note that usually profitable to buy tickets on the American site, since there is less taxes. Compare both options!

VIA Rail Canada - the largest and the only long distance rail passenger carrier in Canada. Operates services to eight provinces. In most cases, only expensive tickets. You can almost always find cheaper alternatives - buses. viarail.ca 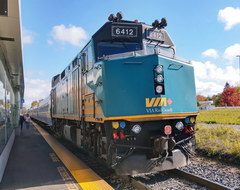 Amtrak - one of the largest U.S. rail carriers, realize trips to and from the city of Toronto in the U.S. amtrak.com

Please, submit prices and photos to the group Globalprice.info on Facebook
Pages: 1 | 2 | 3 [Next] | [Last]