Transportation in Jordan and features of car rental

Buses in Jordan and how to get to Amman Airport

In large cities, a bus service is available, but for a trip between cities you will have to look for bus stations, drivers do not speak English and, literally, on the fingers will have to explain where you need to go. In the buses smoke.

Example of a mini bus between cities at the bus stop of Kerak city (the direction of travel at the station is not indicated,  the cost must be learned from the driver)

Bus in the city of Kerak

Bus from Amman Airport (decent)
If you are going to travel around the country a lot, then the best option is to rent a car.

Rent a car in Jordan

The car is the most convenient means of transportation in the country, the roads are good, and the views along the way are breathtaking. At Amman airport, the world's major car rental offices are represented, but the cost of renting is incomparably higher than in Europe, for example. Expect a bill of 300 USD per week.

It is recommended to rent from local offices, such as Omaish. Their offices are located near the airport, on the main highway. A representative of the office will meet you with a sign when leaving the baggage claim area, take you to the place, the whole process is not very complicated, although knowledge of English is highly recommended. This way you can save 2 times and the bill of 169,3 USD = 120 JOD per week (without full insurance) is real. Deposit (franchise) per car 705,2 USD = 500 JOD

Features of car rental in Jordan 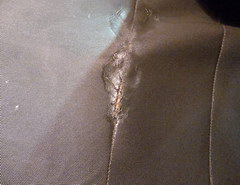 I note the cosmetic condition of the rented cars in this country from bad to terrible. On the one hand, this is good, and it will be harder to find fault when you return, on the other hand, it causes a lot of inconvenience during the initial inspection and registration of all dents, scratches and other things. However, ride quality is usually good!

You will be offered to pay extra for full insurance (in a very polite manner) and this is your personal choice. If you are going to drive through the mountains, drive into the desert, then expect the condition of the roads, suitable only for a full drive car. The main roads are asphalted and their condition is good.

The cost of gasoline in Jordan 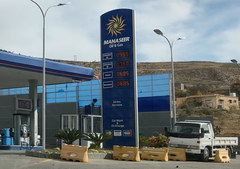 At these stations are accepted as credit cards as cash and refueling is carried out by the employee refueling.

There are private gas stations, where gasoline is a bit cheaper, 0,99 USD = 0.7 JOD for the 90th, but they are without amenities and only cash is accepted.  To the surprise of the appearance and the interior of most gas stations in Jordan resembles photographs of ancient gas stations of the last century.  And all this in a country so expensive to live in!

Cost and features of parking.

Parking places near attractions are free There is little parking space near Petra, the best option is to stay at the hotel with parking and leave the car there.

Taxis look decent from Amman Airport, the cost will be as follows:

The cost of a taxi from a hotel in Aqaba:

Taxi stand at the airport